The Christchurch earthquakes: part of a shaky history 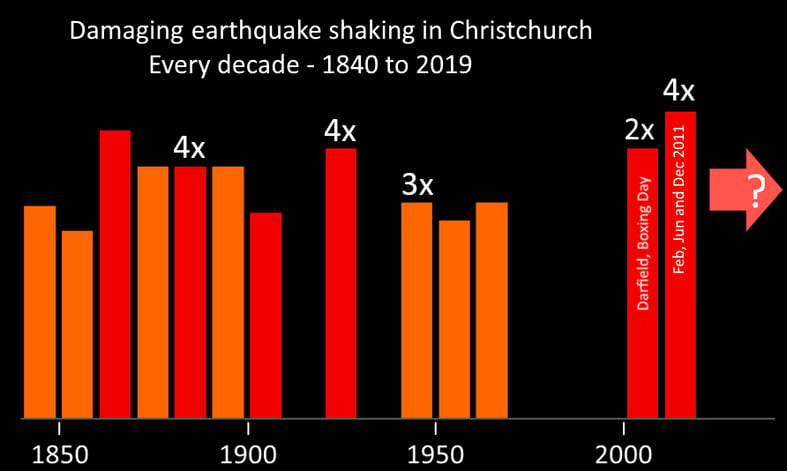 The Alpine Fault. Its next earthquake is overdue, making it quite possible that most Kiwis alive today will see it rupture in a magnitude-8 earthquake, leading scientists say. When it does, the entire South Island will be affected on some level; roads and railways broken or blocked, rivers dammed or diverted, many buildings damaged to some degree. Some towns will be cut off completely, possibly for months. And it’s not just the “big one” itself – there will be an entire sequence of multiple magnitude 7, 6 and 5 quakes rippling up and down the island for years afterward.

An Alpine Fault quake is just one likelihood. As both the Canterbury and Kaikoura quakes showed, previously unknown faults can also present significant risk – anywhere at any time. And the risk of a further damaging earthquake in Canterbury or the northern South Island remains higher than most people realise. Even though New Zealand has been through significant seismic activity in the past decade that saw destruction on a major scale, research indicates that Kiwis, and particularly New Zealand business owners and managers, are poorly prepared for future earthquake sequences.

Psychological research shows that when people estimate risk - particularly around events like a major earthquake - we tend to go with gut instinct rather than what the facts tell us. Or we’re labouring under the delusion that if it’s happened already, it’s not likely to occur again.

"Perceiving risk is all about how scary - or not - do the facts feel," says David Ropeik, a risk-perception consultant who has written multiple books on the subject. "A risk in the future feels a lot less scary than a risk that’s presented right now."

Earthquakes are a fact of life in New Zealand and they will happen again. The 2010 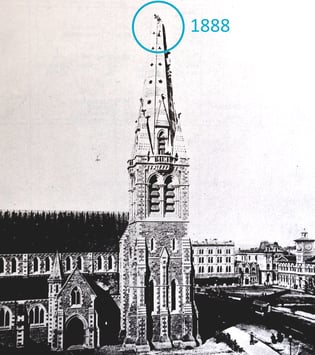 and 2011 Christchurch events were seen as unprecedented, when in fact the city has a history of damaging earthquakes. Between 1840 and 1968 there were 19 significant earthquakes - around one every seven years. Four caused widespread significant damage – 1869, 1888, 1901 and 1922. The earthquakes of 2010-2011 should not have been a surprise – CSI experts led earlier investigations that predicted both the likelihood and consequences of a Canterbury plains quake: 40% probability in any 50 year period of severe intensity shaking.

As we all now know, following the long quiet period from 1968, the Canterbury plains were rocked with an ongoing sequence of major quakes from 2010. More than 15,000 felt earthquakes, with more than 30 over magnitude 5 and 400 over magnitude 4. The effects of these earthquakes continue to be felt by all of us:

And yet, the fact that these earthquakes have occurred tends to give business owners the idea that future events of a similar scale are unlikely. Even though the impact of these quakes was significant, and we know more are coming, the effect seems to be one of complacency: "we've had our big earthquake, there won't be another one for decades." 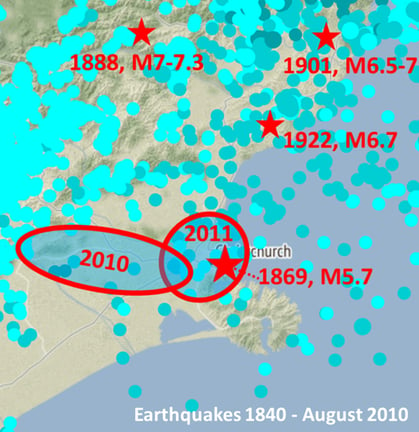 The science says differently. All the current research indicates that we're on borrowed time when it comes to the rupture of the Alpine Fault. Whether from the Alpine Fault or some other unexpected or unknown source, it could happen tomorrow or it might be 50 years from now. The fact that we know we’re in a period of increased earthquakes should, in itself, be reason enough for business owners to be prepared. It comes down to the need for business owners to make smart, fast decisions about their people and property.

Sentinel is designed to help. A service of Canterbury Seismic Instruments, it empowers business owners and managers to best manage their response to earthquakes in terms of protecting people, property and business continuity.

Sentinel draws information from hundreds of sensors across the country. This means Sentinel records and assesses the specific impact on a specific building, whereas traditional science-focused data from GeoNet is not valid for critical decisions and cannot measure real-life shaking variation between different buildings across a city.

By sending alerts to your phone, laptop or other systems, Sentinel enables you to make informed decisions quickly. It instantly compares the point-by-point ground shaking at your site to your building’s NZ Building Code design limits. Results are sent immediately to the building occupants, the building manager and the structural engineer. You’ll know what to do immediately – and have the confidence that you’re making the right call.

Having a solution like Sentinel in place means your business will be well prepared, and you'll be protecting your staff and your property. If the lessons of the past have taught us anything - especially the recent past - it's that earthquakes are unpredictable, but at the same time inevitable. People and businesses need to be prepared at all times. About the only thing that IS certain is that they will happen again; and the best scientists in the world have given us every reason to believe that another major event - the rupture of the Alpine Fault - is likely within our lifetime.

It's no good being complacent about these disasters or burying our heads in the sand; we need to get used to the fact that they're a way of life in New Zealand. We can't prevent the earthquakes, but we can be ready for them. We can protect our people, efficiently manage our business continuity and improve our overall response through data-driven, defensible information provided by Sentinel.